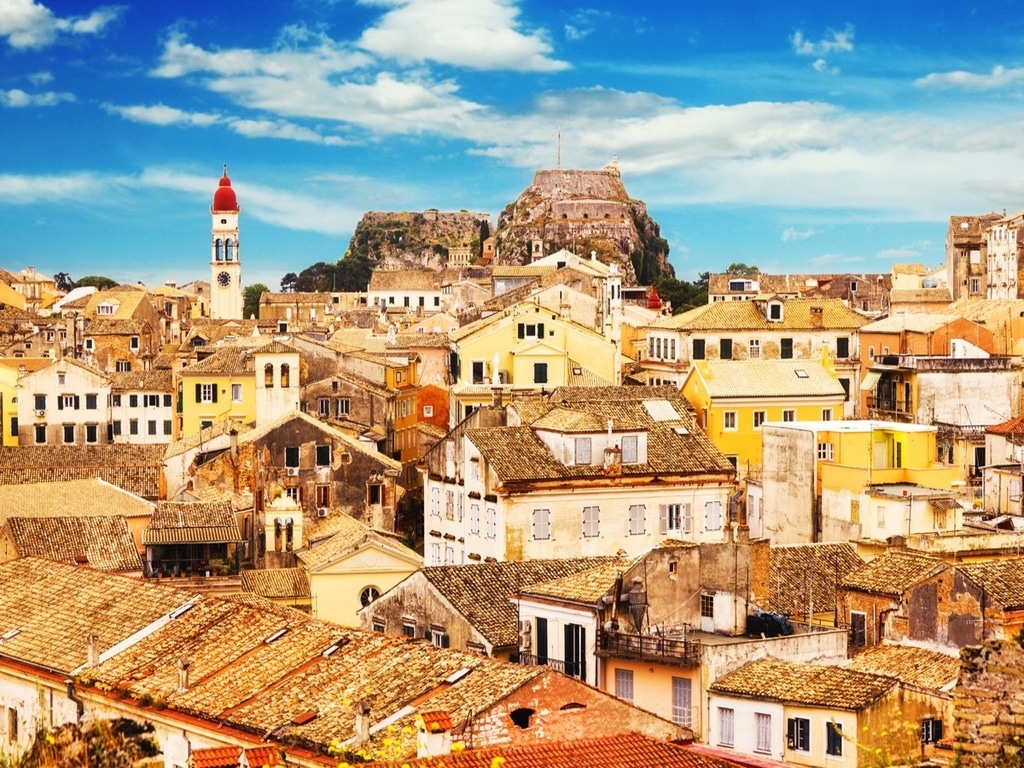 Where the Venetians, the French and the British used to live…Corfu Island.

With the passage of time the island may have changed, but we can still feel the spirit of a distant glorious past . Its rich multi-cultural heritage, its historic monuments, its stunning natural landscape, its crystal clear seas, and its excellent weather all year round explain why Corfu is one of the most cosmopolitan Mediterranean destinations weaving a powerful spell on its visitors.

Corfu (Kérkyra), unlike the rest of Greece, never fell under the Ottoman oppression. Due to the successive dominations of the Venetians, the French and the British over the centuries, the island has primarily become part of the Western rather the Levantine world. Their culture wielded strong influence in the city: it was here that the first Greek University (the Ionian Academy), the first Philharmonic Orchestra and the First School of Fine Arts were founded. 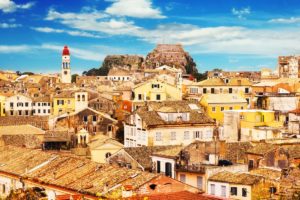 In the beautifully preserved Old Town of Corfu, a UNESCO world heritage site, Renaissance, Baroque and Classical “repertoire” came to be successfully applied to local artistic traditions. Palaces, fortresses, austere public buildings of the Venetian rule uniquely blend with lines of drying washing in tiny alleyways and small secluded squares. Strolling through a complex of narrow cobbled streets with stairways and vaulted passages, the so-called “kantoúnia”, will make you feel as if you’ve travelled to Genoa or Naples.

Discover the most beautiful spots in the city of Corfu walking through:

• Spianáda, the largest square in the Balkans, is the centre of the city, adorned with 19th-century remarkable works of French architecture. Here you can watch cricket games, or attend in musical concerts organised throughout the year.
• Listón, the city’s trademark, where the aristocrats used to enjoy their evening promenades. The characteristic arcades form the most romantic background setting for a welcome cup of coffee at one of the town’s cosy cafés.
• The smart suburbs: Mandoúki, Garitsa and Sarókos.

The most important city’s attractions bear eloquent witness to its rich history:

• The impressive 15th century Old Fortress, as well as the New Fortress.
• The Saint Michael and George Palace at the northern part of Spianáda, built during the British occupation.
• A considerable number of churches. The most imposing one is the city’s Cathedral, the Church of St. Spyridon, the island’s patron Saint, whose relics are kept here. The church’s immensely tall bell tower certainly reminds us of that of San Giorgio dei Greci in Venice. Four processions are held every year during which the body of Saint Spyridon is carried around the streets of the city (on Palm and Easter Sunday, on April 11th and the first Sunday in November). All the philharmonic bands of the city accompany the processions creating a remarkable awe-inspiring spectacle.

Call in at the city’s fascinating museums:

• The Museum of Asian Art: Being the only one of its kind, it was founded in 1927 after the donation of 10.500 items by Gregorios Manos. Until 1974 it was a Chinese and Japanese Art museum, but it was then enriched with other private collections.It is housed in Saint Michael and George Palace.
• Archaeological Museum: Here you can admire important finds from the temple of Artemis and excavation finds from the ancient city of Corfu.
• Byzantine Museum: It is housed in the Church of the Virgin Mary Antivouniotissa and houses an interesting collection of icons and ecclesiastic items from the 15th to the 19th century.
• The Banknote Museum showcases a collection of Greek coinage from 1822 to the present day.
• Dionysios Solomos Museum: The national Poet of Greece left Zakynthos and moved to Corfu, important intellectual centre of the Ionian islands in those years. Solomos lived in a state of self-imposed isolation, and Corfu offered him the ideal environment to work on his studies in poetry. Today his house hosts a museum dedicated to his honour. 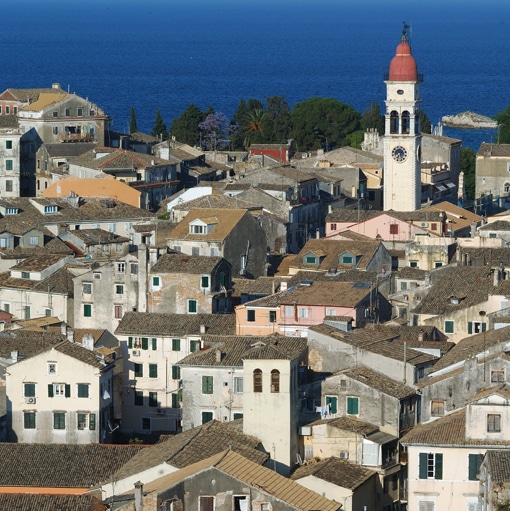 These five sites located around the city of Corfu used to be the aristocracy’s favourites:

• Mon Repos Palace was built by the British Commissioner Adams as a gift to his Corfiot wife. It is a small but beautiful palace with colonial elements, which today operates as a museum. In this luxurious dwelling, Prince Philip, the Duke of Edinburgh and husband of Elisabeth the Second, was born in 1921. The park around the palace is ideal for long romantic walks.

• Kanóni (meaning canon) offers from its circular terrace an amazing view across the island of Pontikoníssi (meaning Mouse Island), one of the most photographed spots of Corfu! According to the legend, this rocky islet was a Phaeacian ship that was turned into stone.

• Paleópolis (at Mono Repos estate) stands where the Agora of the ancient city of Corfu was located. Admire the remains of several public buildings erected there along with sanctuaries, workshops and residencies.

• Achilleion is a fairy palace built among cypresses and myrtles by the Empress Elisabeth of Austria, who wished to escape from the Austrian court. Elisabeth truly fell in love with the island, and she dedicated this palace to Achilles as she cherished the belief that he represented the very soul and fairness of Greece.

The island where Ulysses met Princess Nausicaa in one of Homer’s Odyssey most celebrated scenes is a magical destination all year long: colourful music events, culinary feasts, religious festivals, carnival celebrations –known for their deep Venetian influences–, and the most joyful Easter in Greece form an exquisite mosaic of experiences.

Edward Lear vividly describes the magic of Corfu: “Anything like the splendour of olive-groves and orange-gardens, the blue of the sky, the violet of the mountain, rising from peacock-wing-hued sea and tipped with lines of silver snow, can hardly be imagined […]”.

And don’t leave before you pay a visit to the nearby islands of Paxi and Antipaxi!